Bathed by the waters, touched by the clouds, caressed by the forests: my Fab Castle is the kingdom where you can feel valiant princes or romantic princesses.

It is the cardboard castle to be built and colored entirely without the use of glue or scissors.

The magic is all inside a box: just open it with the enchanted wand of creativity to start incredible adventures. So, before the eyes … Solid brick walls rise and two sparkling towers take shape, which making the sky shine. In the rooms and between the secret passages, mysterious words are whispered. When the drawbridge is lowered and the big door opens into the large courtyard, the fantasy lights up.

It is the fortress that contains fairytales.

Wearing the crown is the secret to feeling like a beautiful princess with a scepter decorated with precious and magical gemstones. Or to become a brave prince with a shining sword, to defend the kingdom.

There is no time to get bored. The queen is busy with the preparations: there will soon be a ball at court. Archers train with targets – they must be prepared to protect their friends. The princess caresses her docile horse, a travel companion to discover faraway lands. The jester entertains the courtiers with music and adventurous tales.

Composed of 96 pieces, my Fab Castle is TODO Talent Cardboard’s first dynamic game. It is not just an educational game to stimulate the dexterity and creative spirit of children: it is a journey of emotions that the little ones can live together with adults.

It is an experience to be assembled, one piece after another, until the details and characters included in the box are defined. To be discovered in the dimensions and in the versatile spaces, which allow surprising playability thanks to the different sets of which it is composed of. To live in order to imagine new adventures that never end.

With a touch of fantasy, my Fab Castle turns into the little big kingdom in which to be princes or princesses. By pronouncing the magic phrase “Once upon a time” the spell is dissolved and the adventure finally begins.

TODO Talent Cardboard is the real world of toys made from cardboard, in pre-cut kits.

King Union (Europe) S.r.l., the producer and developer of the TODO games, has always made ethics an essential professional value, providing a series of certifications to guarantee their professionalism, quality and care in the use of materials and respect for natural resources. All TODO products carry the CE mark in compliance with European safety standards. King Union (Europe) S.r.l. has obtained and maintains the following certifications: FSC® C107476, ISO:9001, SA8000, ISO:14001.

TODO toys are designed to be built without scissors and glue, produced completely in Italy, sticking to the initiative Supporting Disabled People and pursued the value of eco-sustainability.
TODO games is characterized by an educational connotation aimed to stimulate the creativeness, the chromatic intelligence and the socialization in the game. This allows the kids to use their own imagination and talents, their dexterity, intuition and intelligence in the use of color; all TODO cardboard toys are complete with watercolor palette.

TODO has created “my ECOLOVE CHRISTMAS” the line of games dedicated to the nativity to make Christmas a cardboard fairy tale to build, color and play with.

TODO Made in Italy with love. 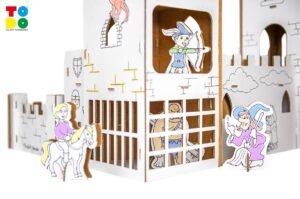 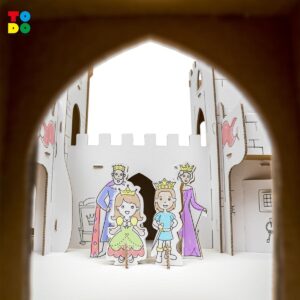 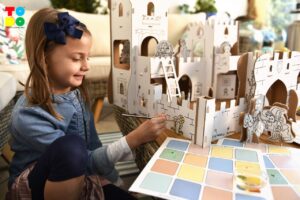 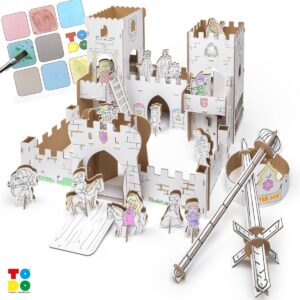