There is a story inside

This 4-wheeled story began in the early Sixties, in the Tomasi family’s farm at Altavilla near Vicenza, when Liviano, together with his brothers Augusto and Sergio, started building go-karts. In the following years, Fratelli Tomasi (Tomasi Brothers) tried the production and distribution of children’s tricycles, until a sales agent showed Liviano a model of English pram, the kind used by the royal family, and he decided to develop a “made in Italy” version of it: Inglesina, a fusion between “Inglese” and “carrozzina” (“English” and “pram” in Italian), became the style of the firm established in December 1963 while the first product was named London. In the Seventies L’Inglesina Baby began expanding its presence abroad (Germany, and later France and Israel) and in 1979 it changed into a stock company.

New models of prams and strollers were little by little added to the catalogue. During the Eighties, Liviano Tomasi implemented the first information advancement providing the management with a control system. In the second half of the Nineties his sons Ivan and Luca joined the company for a gradual generation shift that has let them achieve the positions of President and Managing Director.

At present L’Inglesina Baby employs around 130 people directly and a hundred more indirectly and has branches in Russia, China and the United States. The child’s wellbeing is the company’s main driver, through collaborations like the one with the Neonatal Medicine ward of Bologna’s Ospedale Maggiore which has created the Welcome Pad® mattress, ergonomic support where the child is optimally sheltered in the first delicate months after birth, and through the establishment of the Baby Wellness Foundation, non-profit organization that gathers professional figures to spread scientific knowledge about the newborn baby’s needs among as wide an audience as possible.

Definitely, System Quattro is the line at the top of the range:

All our System Quattro models have been developed in order to grant the newborn baby total comfort since the very first days, for instance thanks to the spacious carrycot whose wide inner size allows the child to lie on his/her back until 6-months-old at least,

These travel systems include four functions: pram, stroller, car seat and the Stand-up support upon which the carrycot can be clasped so to leave outside chassis, wheels and dirt while letting the baby go on sleeping.

As the consumer becomes better and better informed and the companies must interact reassuringly and consciously with the parents-to-be, Luca Tomasi proposes

a strategy of ever closer cooperation with the specialist trade network, essential in the consumer’s stage of product choice. We will keep on working in partnership not only from the business point of view but also through dedicated collaboration and training projects, in order to create, together with our retailers, an ecosystem promoting a more heartfelt and widespread culture of the baby’s wellbeing.

Inglesina Baby Spa is the leading Italian company in the production of prams, strollers, car seats and children’s products, founded by Liviano Tomasi in 1963 in Altavilla Vicentina (VI) by an inspiration for the English prams of the British courts.

For more than 50 years, Inglesina products have combined functionality and the fundamental well-being of the child with an aesthetic with attention to detail and timeless elegance.

Artisan tradition that meets the most current technology to give life to products that guarantee the smallest experiences of total well-being. 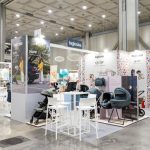